On the smallest of length scales, we have sought the origin of mass itself, the “missing link” in the Standard Model.

In 2012 we found a new particle with a mass of 125 GeV and are now scrutinizing it. Up to now it looks exactly like the Higgs boson predicted by the Standard Model where it provides mass to all the other elementary particles. This discovery was a triumph for the Standard Model and caused the Nobel Prize to be awarded to Peter Higgs and Francois Englert.

Below is shown the matter particles, the fermions, of the Standard Model. Together with bosons, such as the Higgs, these particles explain all observations made in earthly laboratories at this stage.

However, we know that this cannot be the full story

To probe for a more comprehensive theory providing the missing explanations, the world's largest particle accelerator, the Large Hadron Collider (LHC) is colliding protons with unprecedented energies, From 2015 and onwards it will be almost 7 times higher than at earlier accelerators. In the Discovery center we pursue studies of Higgs boson production and decay, search for super-symmetry and precision electroweak measurements.

We provide both state-of-the are precision measurements of various observables and state-of-the art calculations of those observables in various theoretical scenarios, all in order to probe for deviations from Standard Model predictions.

We also pursue studies of the little understood collective properties of the quark-gluon plasma. This plasma is made of a large number of quarks and gluons at high temperature and pressure, such as the conditions were in the Universe in its first microsecond of existence.

These conditions are achieved by colliding heavy lead ions together in the LHC and this has led to many striking results, including the fact that the quark-gluon plasma behaves like a “near perfect fluid” with minimal viscosity.

Measuring neutrinos from the sky

A complementary approach to searching for dark matter particles and to understand better the neutrinos is to look upwards towards the sky for high energy neutrinos.

These are produced in reactions of cosmic rays coming from violent events in the Universe. Using the IceCube detector at the South Pole, the worlds largest neutrino detector made of one cubic kilometer instrumented ice, we search for neutrinos from dark matter annihilation and try pushing the measurements of the neutrino properties to unprecedented precision.

The first observation in 2013 by IceCube of high energy neutrinos from sources outside the solar system was among the 10 “Physics Breakthroughs of the Year”. 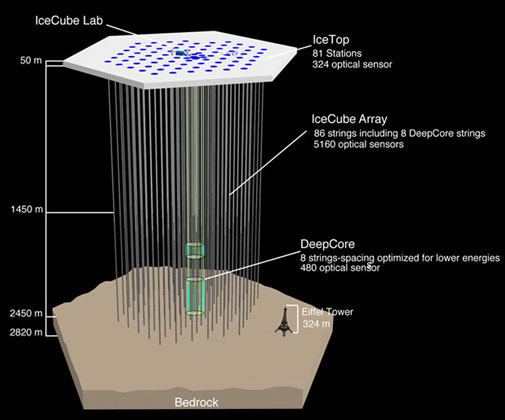 The Planck Satellite was launched in 2009 on a highly successful mission to measure the first light of the Universe, the light that was released 380000 years after Big Bang when the hydrogen atoms first formed. With Planck we test theories of the very early Universe, such as the theory of inflation.

Like for IceCube, the results from the Planck satellite have also been “Breakthrough of the Year” and “Science magazine top story”. In a recent development, the Discovery center is now also involved in a new project aiming to build an earth-based telescope for cosmic microwave background radiation on the Summit site in the middle of Greenland.

These unique investigations spanning from the smallest attainable length scale to the scale of the Universe come together in the Discovery center and support each other in the quest for a more comprehensive explanation of our Universe than the one we have.

For example: The “dark energy” that blew up the Universe in its very first moment of creation, according to the theory of inflation, could very well be the quantum field in which the Higgs boson is a ripple. The dark matter could well be right-handed neutrinos, visible only via interactions with the Higgs boson, apart from the large scale gravitational effects that already have revealed the existence of dark matter.

Thus, observations at the very largest and very smallest scale may together bring about a better microscopic theory for the constituents of matter.